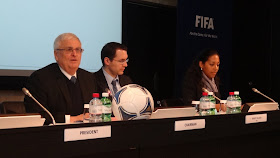 Theo Zwanziger takes the chair for the first time. In addition, six new members were added to the committee, meeting for the first time since appointments were made in December. Geoff Thompson and myself, immediate past chairman and deputy chair respectively, were designated as Single Judges to handle routine cases on an individual basis for the upcoming term. Both Geoff and myself have served in that capacity already and appreciate the confidence of the committee, having now been formally re-appointed by the new chairman.
Chuck Blazer at 1:21 PM